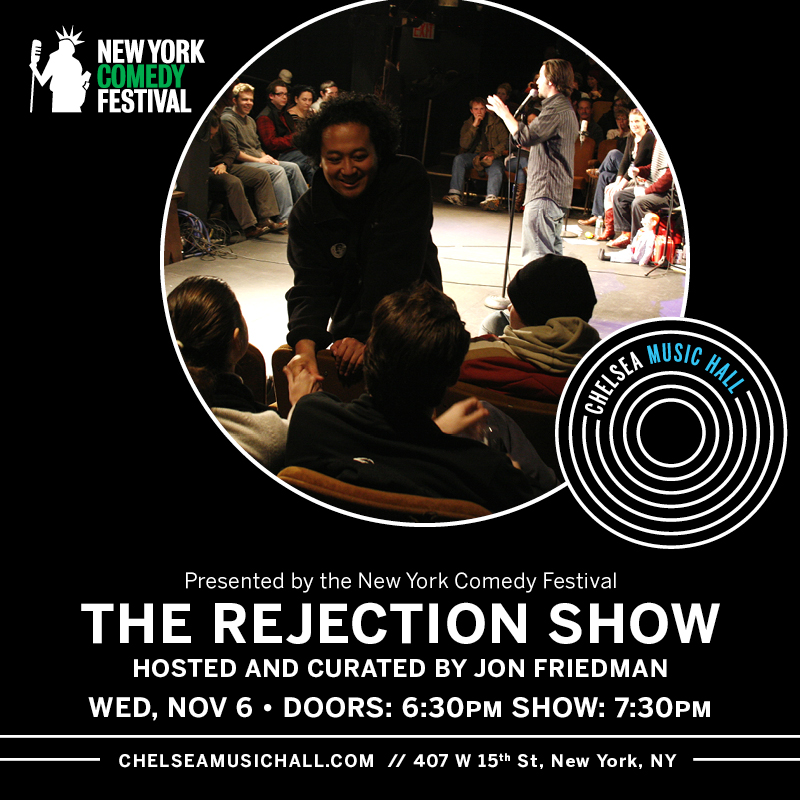 Standup/storytelling/multimedia live comedy variety show featuring stories of failure and rejection, and actual rejected works of well-known and up-and-coming comedians, writers, animators, television stars, and social media personalities, with each show tackling a variety of themes of rejection as it relates to trying to make it in showbiz.

For every piece of accepted material, there are hundreds of pieces of rejected material- and unique, often heartbreakingly hilarious background stories that go along with them. The Rejection Show takes a look at these rejected works (through clips, slide shows, correspondences, power points, reenactments, performances, negative comments, etc.) and the stories behind them as told on stage by the talent themselves. What are the reasons that something so good can be overlooked? Or more importantly, what were you thinking when you presented something so horrible? Through these cathartic experiences, The Rejection Show offers an inside look at what it takes to deal with and overcome rejection, in an industry where rejection so heavily outweighs acceptance. Also, it’s hilarious.

In experiencing rejected material first-hand (and knowing it has already been rejected), the audience is brought into a world that is usually kept behind closed doors, allowing them to gain entertaining, comedic, and thought-provoking insights into the process of attempting to achieve success. For over 10 years, The Rejection Show has proven that “it is so much fun to relate to and hear about someone else’s hilarious train wreck of a horrendous failure” (NPR).

Scenes from @weliketopartyofficial on Saturday nig

Some photos from last month’s Sweet Show. Join u

After some much needed rest and recovery @global_f

The @laugh.events show was an incredible night of