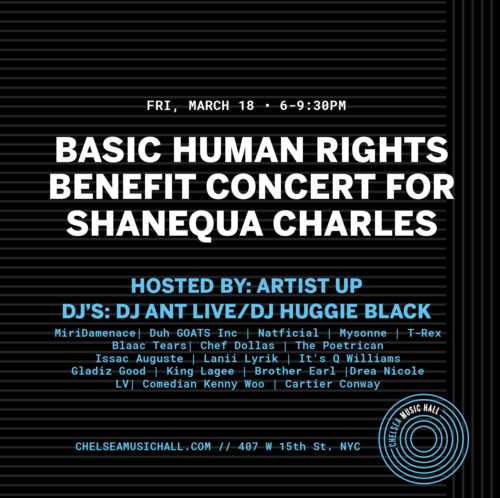 A major benefit concert for Shanequa Charles/Basic Human Rights and / bringing signed and unsigned artist together on the same stage.

Music is a universal language, all people regardless of gender, age or culture identify with music as a mode of communication. By having this major benefit concert to raise awareness about the need for people to be civically engaged in their communities, we will not only be supporting a grassroots candidate for NYS Assembly but empowering people to DEMAND their Basic Human Rights in their respective communities.

Shanequa Charles is a grassroots candidate running for her life and trying to take her people with her to freedom and liberation. By combining forces of remarkable unsigned artists, mainstream artists and thoughts leaders, an opportunity is created to truly make deep rooted change in community. We are asking that all participate by donating and investing their time to support this candidate and these issues. The Bronx is the lowest performing county in all 62 Counties of New York State but it doesn’t have to be, we are #StrongerTogether.