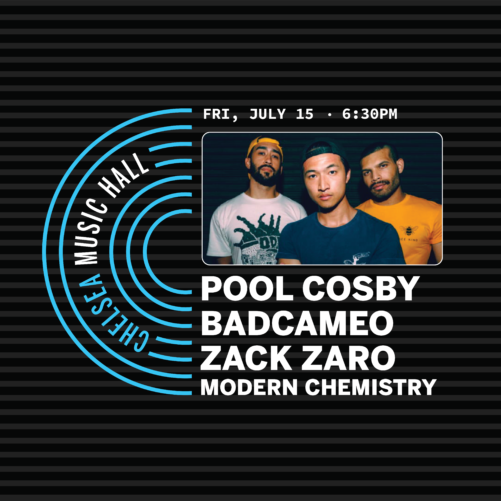 Originating from North Carolina and now living in Clearwater, FL, Indie-Funk Fusion band BadCameo blends all types of influences into a cocktail of disco-glam grooves! The band motto is “fuse whatever you got into this music”, which is evident in their flamboyant stage persona, eclectic aesthetic, and use of props like their signature stuffed fish. Always immersing fans in an all-out dance party (the BC guarantee!), it’s clear that BadCameo is a band unlike any other.

In October 2020, the band released their debut studio album “BadCameo Out Loud”. The album was self recorded and engineered, and explores the relationships one has with themselves and those around them. The nine songs push the boundaries of funk, disco, jazz, and pop, while even slipping in a little samba!

Pool Cosby is a sample-based electronic trio from New York City. Made up of producers jacuzzi jefferson, Kevin Kuh, and Otto Botté, the group strives to combine their diverse musical and cultural backgrounds to explore new sounds.

The members of Pool Cosby have earned multi-platinum and gold plaques as well as a Grammy nomination through their work behind the boards. Their extensive list of engineering and performance credits include Paul Simon, 50 Cent, and Enrique Iglesias.

Since forming in 2012, Pool Cosby has worked with a wide range of collaborators from Raekwon of Wu-Tan Clan to Adrianne Lenker of Big Thief. With their blend of jazz, hip-hop, pop, and live orchestration, Pool Cosby continues to push the envelope and expand their sound.

Zack is a professional Singer/Guitarist who’s rock vocals are matched by his guitar playing abilities. Since he was a child, Zack has been performing for audiences in clubs and bars across the country in major cities. Combining the worlds of Pop, RnB and Country, Zack has the range to perform in any style and has the showmanship to captivate any audience. Zack is also an accomplished actor, having done several Broadway national tours.

modern chemistry will most likely be the first band in space.

hailing from new jersey, the band is all about constant creativity and never doing the same thing twice. the band brings a high level of intensity and dynamic with their live performances.