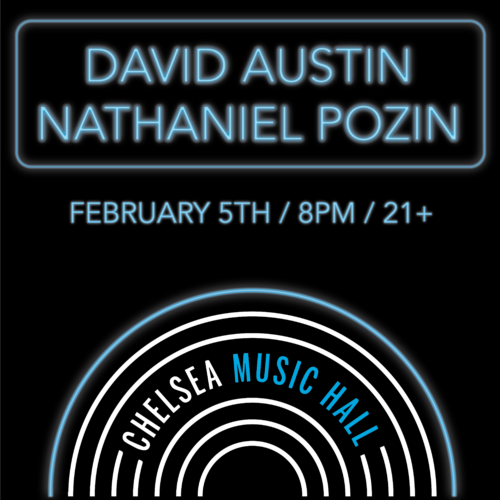 David Austin is a Nashville-based singer/songwriter with roots in California and New England. He released Southwood Waltz, an 8-song record centered at the crossroads between adolescence and adulthood, in April 2019, and has been touring with his band since. He draws much influence from singer/songwriters of the 1970s – Billy Joel, James Taylor, Bruce Springsteen – and has been compared to modern artists like John Mayer and Jack Johnson. He has a new record set to be released in Summer 2022, and has released three singles from it already – Let Them Boys Play, Alone for Now (Maybelline) and Good Company.

Nathaniel Pozin is a 26-year-old, New York City-based musician, originally from Southern California. At the start of his music career, he drummed in Orange County and Berkeley-based indie bands. In his early twenties, he became attracted to the energy, diversity, and excitement of New York City – additionally, some of his favorite artists (Interpol, The Strokes, Velvet Underground, Talking Heads) had launched their careers there. He moved to Brooklyn in 2018 to pursue a career in music and since then has been writing, producing, and releasing his own songs – as of summer 2021, he has shared production duties with close collaborator John Ried at Bricky by Brick Studios.

Nathaniel’s records are typically homespun, carefully arranged, deeply and meticulously layered, and atmospheric – yet imbued with pop-inspired hooks – and have been shared by Birp.fm, David Dean Burkhart, IndieTapes, and The Luna Collective, among other publications. His next song comes out at the end of November.