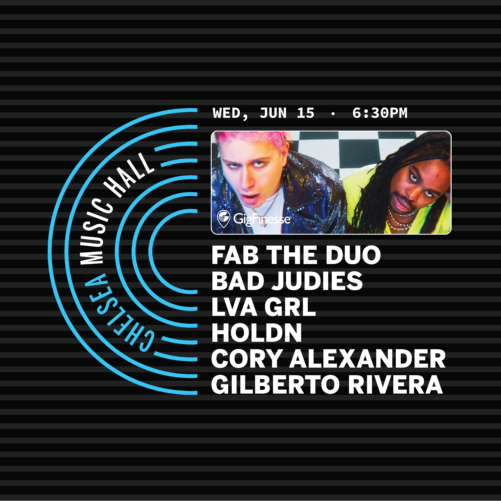 Fab The Duo, a recently LA-based alternative-pop duo, aims to smash societal norms through music and love. Previously hailing from New York, the glamorous boyfriend pair, Greg Driscoll and Brendan Eprile, had quickly become rising stars in New York City’s nightlife and music scene, performing to big, energetic crowds at iconic venues like The Cutting Room, The Stonewall Inn, and The Bitter End. Their music has been featured on notable press like BILLBOARD, ADVOCATE, HUFFPOST, and PRIDE, with ALTPRESS calling them a “group that should not be overlooked.” They were recently recognized by the John Lennon Songwriting Contest, winning the Song Of The Week Award.

LVA GRL is a queer femme artist based in New York City. Every song is an honest piece of her soul. LVA GRL considers her music autobiographical and hopes her listeners can find a little respite through her music. She makes alt-pop with Lofi and RnB influences, expect to hear a heavy handed synth, some car horn samples, and the occasional crunch of a Cheeto.

The Bad Judies are a drag band based out of New York City. Its members include multifaceted drag queens, WorshipHer, WESLEY, and Lyra Vega. These queens bring live music, dance, vocals, covers and original songs to their shows. They also have a flare for comedy and lip-syncing, which is tradition in the drag community.

The Bad Judies are here to fill a much needed gap in the demand for live vocals AND instrumentals in a drag show. Giving you piano, flute, percussion, bass, guitar, vocal harmonies and much more, all played and produced by the queens themselves.

The Bad Judies will play just about anything but have a knack for rock, pop and disco.

Dark-pop artist, HOLDN, is on the rise with a gritty pop sound that sets her apart from the rest. An alternative rock veteran, HOLDN is no stranger to stepping onto the stage and giving her audience a place to feel safe in being who they are and giving them an electric, interactive performance that keeps her fans coming back for more. Although mysterious, she is also raw and candid, seamlessly providing listeners with in depth synth-pop music. Different, yet formulaic, she displays her rawest form through her music.

HOLDN brings a full plate of emotion and honesty with a sharp-toothed side of unapologetic wit to the pop table, while graciously luring you in with her mysterious aesthetic and soulful, yet haunting, melodies. She has previously stepped into the spotlight at festivals such as Vans Warped Tour, Skate and Surf, & several east coast pride festivals and onto countless venue stages across the country.

Cory is a singer songwriter from New York City. He released his first few singles last year along with 2 music videos. Having modeled for Vogue along with many other high end brands, he is well on his way to becoming a superstar. What’s next for Cory? More music is coming your way this summer. He is working on the release of his first EP and there are sure to be more music videos and live shows to follow.

Gilberto Rivera is vocalist born in Bayamon Puerto Rico, raised in Orlando Florida. From a very young age he’s been singing and performing in any stage that welcomes him. About 4 years ago he moved away from Orlando to peruse the life of big star in a big city. You may have seen him singing all over the subways in New York or from his recent appearance on American idol! He hopes to bring light and love, and be that rainbow of sunshine after the storm!