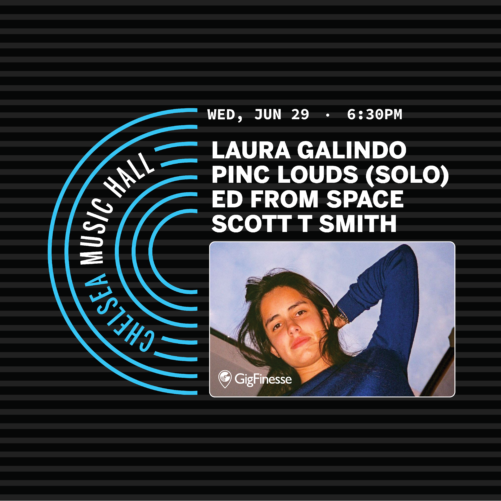 A Brooklyn-based singer/songwriter, producer, multi-instrumentalist, actor, and showman with a restless spirit and love for the sincere, Laura Galindo is a natural-born storyteller with a sound something like mixing Amy Winehouse & Daft Punk. Fusing pop, jazz, & R&B with a modern twist, Galindo became known for a sound that is impulsive, evocative, and entirely her own. Her lyrics toe the line of memory and fantasy, crooning fables in her rock-influenced voice from the perspective of past, present, future, and imagined Lauras. Playing everywhere from downtown dives to off-Broadway spaces, Laura and her band have become a New York fixture, celebrated in music and theater for their inviting energy, electric performances, and inventive arrangements. Band members include Greg Tock, Isaiah Hazzard, Julian Briones, Sam Revaz, and Henry Trinder.

Claudi moved from Puerto Rico to NYC in 2015 to fulfill her dream of playing in the subway. She absorbed the city from below and spit it out in the form of Pinc Louds, a project that has been described as “Billie Holiday meets the Pixies”, “tropical punk”, “Daniel Johnston starts a psychedelic doowop band” and other such (flattering) nonsense. This diversity of influences, a reflection of the city that spurred the project, makes for an explosive combination that’s as exciting as it is unique.

Claudi’s passionate performances on the street and in the subway quickly gained her a following, including Paul Banks of Interpol, who called her “absolutely epic. I don’t want to waste words trying to describe magic, but this music tuned my soul today.”

Pinc Louds has gone on to play at such NYC venues as le Poisson Rouge, Joe’s Pub and Lincoln Center, as well as tours throughout the US, Europe and South America.

Although they are not quite from space but from Peru, Italy and New York — their sound certainly is alien. The combination of vibrato-filled guitars, funky bass lines, soothing keys that feel like ice-cream to the ears, extraterrestrial drum grooves, earth-shattering guitar solos and blues-infused vocal performances served on the rocks, summon you for a mesmerizing space expedition. If a simplified explanation of their sound was needed, a solid answer would be: indie r&b, alternative rock and funk with brushstrokes of jazz.   The debut EP of the NYC based band, Yellow Nights, was released in July of 2019. The 5 song record “offers a window to the world” as published by Honeysuckle magazine.  Their three singles released in 2021 – “Silence”, “Words” and “The Tunnel” are available for streaming.