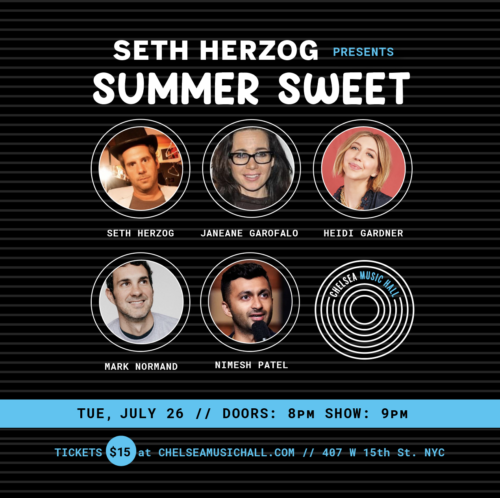 It’s mid-summer. It’s that time of the year when anything seems possible. When you throw away the normal rules of the year and take risks you might never normally take. It’s also that time of year when you ask yourself, “How can that person afford that trip to Greece!? They’re an interna at a startup!” Yes it might feel like everyone is at the beach or trotting around the Europe, but the best of us, the true blue New Yorkers are sweating it out here in the city, going out, getting silly and having the time of our lives doing it! This month’s SWEET show will be one of the times this summer, where you go out knowing you’re going to have a memorable eveing and you go full speed ahead! Bring your friends, they’ll want to see this too!

HEIDI GARDNER (Stand out for the last 5 seasons of SNL, “Girls5Eva,” “Unbreakable Kimmy Schimidt,” “Life of the Party”)