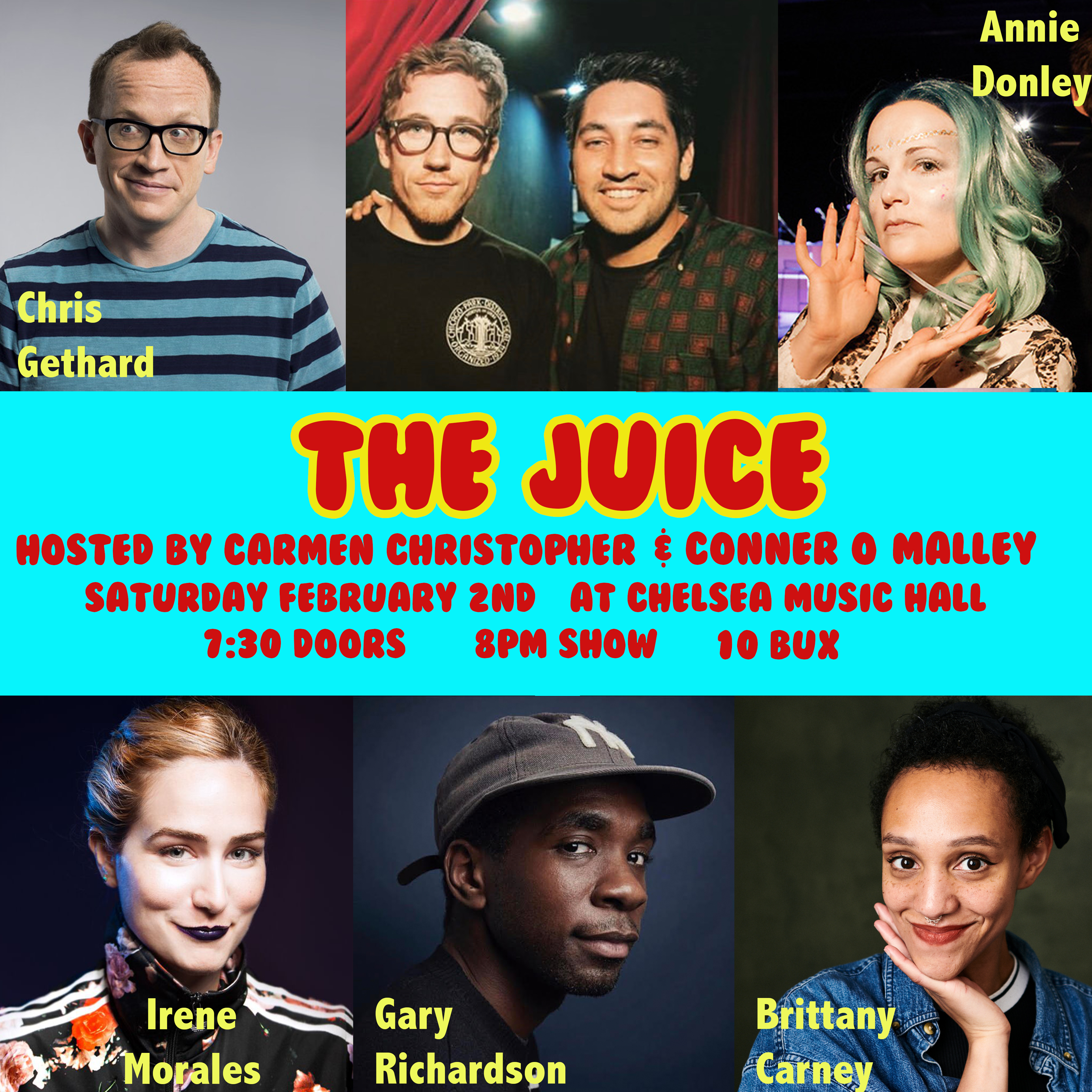 COME OUT FOR A NIGHT OF DANCING, LAUGHTER AND FUN! HOSTED BY CARMEN CHRISTOPHER AND CONNER O’MALLEY

Get your tickets here!
Carmen Christopher:

Carmen is a Brooklyn based comedian and Chicago native. He was a writer and performer on The Chris Gethard Show and has appeared on At Home with Amy Sedaris, Late Night with Seth Meyers, MTV’s Bugging Out, and has roles in the upcoming season of HBO‘s High Maintenance, Comedy Central’s Alternatino, and Netflix Original movie Otherhood. He co-created Sunset Peak for Comedy Central, Little Banks on Wall Street, and sketches for IFC Comedy crib. Carmen was honored as a 2017 Comedy Central Comic to Watch and spent the past summer and fall touring the country as the opener for Chris Gethard.

Conner O’Malley:
Conner is a comedian, actor and writer best known for his work on  Late Night With Seth Meyers for which he was nominated for a Writer’s Guild of America Award. He has appeared in Horace and Pete, Broad City, and The Characters.
Kerry Lacy:
Kerry is very excited to be producing  The Juice and bringing her favorite comedians to Chelsea Music Hall, along with her favorite music. She’s been collecting records and DJing all over New York City for seven or so years now. Kerry is also an actor and creator of the short film series “Viola” as well as a visual artist. Take a look at her website www.kerrylacy.com to learn more!
Chris Gethard is the host and creator of The Chris Gethard Show and the podcast Beautiful/Anonymous, and author of the “Lose Well.” His one man show “Career Suicide” enjoyed a successful extended run off-broadway as well an HBO Special. As an actor he has appeared in Don’t Think Twice, Broad City, The Office, Parks and Recreation, and more.

Gary Richardson is a writer for Saturday Night Live and known for his work in Spider-man: Homecoming, Don’t Think Twice, and High Maintenance.

Ana Fabrega:
Ana Fabrega is a comedian in New York City. She performs at comedy venues and art spaces around the city. She was selected for Just For Laughs “New Faces: Characters” 2017 and for Comedy Central’s “Comics to Watch” for the 2016 New York Comedy Festival. The New York Times describes Ana as “an inventive performer with a knack for off-kilter characters.”
Ana is writing, starring and co-executive producing the upcoming HBO show Los Espookys. She previously wrote on The Chris Gethard Show on truTV. She has appeared on IFC’s Portlandia and truTV’s At Home with Amy Sedaris. She wrote the comedy zines “The Truth About Pangaea” and “The Truth About Pangaea II” published by Social Malpractice Publishing.

Annie Donley:
Annie Donley is a comedian, actor, and host based in NYC, originally from Houston, TX baby! Annie is a founding member, instructor, and the former Programming Director of The Annoyance Theater NY. She has been performing and teaching improv for 3+ years in Chicago and NY. She currently hosts a public access TV (BRIC) called, “Poppin’ Off with Annie Donley” and performs regularly with $700 Rules (formerly The Holy Fuck Comedy Hour) at Union Hall. She has performed at Carnegie Hall…TWICE (haters will say it’s fake)! If you like original Kermit memes you can follow her on Twitter @annieassqueef