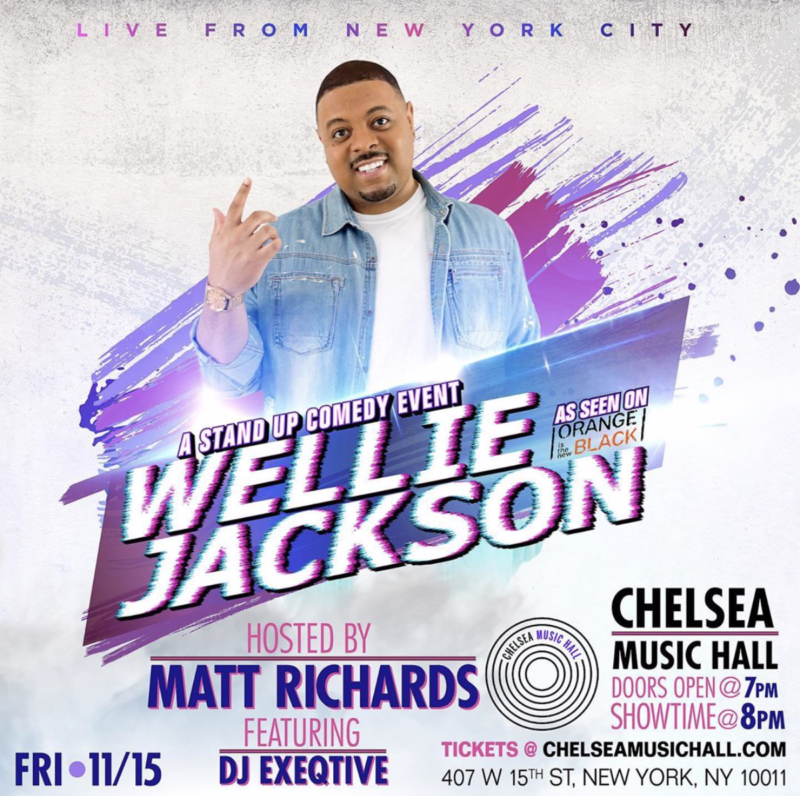 Anything worth having demands hard work and sacrifice. Just ask New York City’s newest superstar-in-the-making Wellie Jackson. Being a stand-up comedian might have been the last thing on his mind growing up the former college basketball standout turned to comedy after a season ending injury. Wellie found comedy while attending college encouraged by friends and family he turned to a friend who was an established National Comiedian who help him get his 1st show on the New York Comedy circuit. After his 1st show he was booked for another show at another New York City comedy club which is where he learned his style of telling his life story through comedy is what makes him unique.

After making appearances on The Wendy Williams Show, Mtv’s “Totally Clueless”, Sirius Xm radio and various other media outlets with only being in comedy for a short time Wellie is recognized as one of the brightest up and coming stars in the comedy world. Wellie has traveled the country with both  Tracy Morgan and Tiffany Haddish.

Wellie who has toured with Tracy Morgan since 2011 was apart of Tracy’s come back tour entitled “Picking up the Pieces”  doing over 65 dates throughout the United States and Canada which included  New York’s prestigious Carnegie Hall, Chicago’s Civic opera house , and  The Novo Theater in Los Angeles with the 30 Rock star. He also wrote for Tracy’s comedy special “Staying Alive” currently on Netflix as well as the TBS comedy series “The Last O.G.” which is currently the highest rated comedy series on the network. In 2017 Jackson also did Dates on Tiffany Haddish’s ” She Ready Tour” as well, not to mention he also headlined The Apollo in May of 2018. Wellie is currently Co-Starring on Orange is the New Black on the hit shows final Season.