Down to Mars with special guest Quinnette 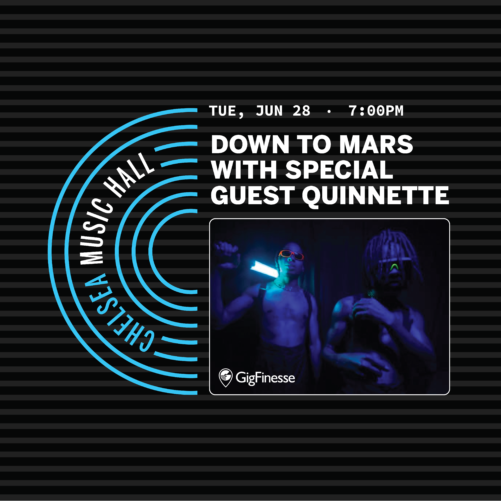 The Kentucky bred production duo “Down To Mars” blends old and new influences to bring a new sound to hip hop and r&b. Malachi and Pinky formed the group after moving in together in 2017, where they continued to develop their craft and gain notoriety for their music productions.

Their first single, “The Loneliest Number,” amassed over 2M+ streams on Spotify and continues to grow. They’ve secured placements on prominent playlists such as Discover Weekly, Soulection, Fresh Finds, and Shisha Lounge.

They’ve been making a name for themselves producing for artists such as viral superstar Zaza, (‘What I do’), Bblasian, (‘Who’s with Me’), and Dope Tajy (‘Wild Thing’). They’ve headlined shows at the Bowery Electric and were slated to open up for Jack Harlow on his No Place Like Home Tour last year. Drawing their influence from sounds of the past like Jimi Hendrix, Earth, Wind & Fire, Bootsy Collins, D’Angelo, and gospel music while simultaneously incorporating modern sounds into their music, Down to Mars is carving out their place in the music industry.

Quinnette, a native of Louisville, Kentucky understood she could make music a life at the age of 14 by collecting records; her journey began growing up in the south where music was cherished by feeling, & was not conformed to any era or time. She is an audio engineer and editor. Shade 45, Sways Universe, featured a mix of hers. Adept at spinning vinyl and grooving with Serato: there is no limit to genre, as her unique mixes inspire soulfulness all round.. As an educator, she uses music and technology to empower youth, teaching DJ skills and mentoring young children to encourage their dreams.

Full service and smooth with it, producing beats and working the boards. She can rock the park or groove the club; she can even spin a stadium, as she did for 3 years as the DJ for the University of Kentucky Women’s Basketball and Volleyball Program. As the DJ for band Producing A Kind Generation, this commitment to kindness informs her endless versatility.