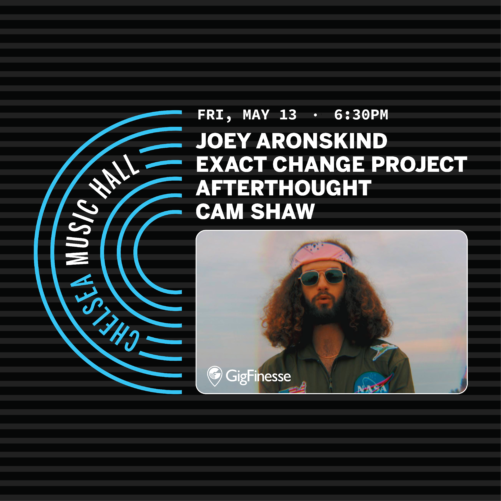 Joey Aronskind is a 25-year-old indie rap, pop, and R&B artist based in Brooklyn. Originally from the suburbs of New Jersey, he is of Israeli and Italian-American descent. Joey recently recorded an 11-track EP with Grammy-nominated producer Jayme Silverstein titled “All-American Aronskind’s,” which is set to release this summer, and will include his two most recent singles “Wide Awake” and “Just a Dream.” Some of Joey’s many influences include Kanye West, Lauryn Hill, Kendrick Lamar, Mac Miller, Kid Cudi, J. Cole, Drake, and Bad Bunny. In addition to his music, Joey is currently launching a recycled clothing brand called “<3beppe,” which combines secondhand and vintage fabrics and garments. He curates and hand-sews each piece himself. Joey is passionate about social and environmental justice on a global scale. He is determined to devote his interdisciplinary art to help ameliorate some of the countless issues facing our world today.

Exact Change Project is a live hip-hop band from Queens and Brooklyn, New York City. Their progressive style fuses international vibes with jazz, funk, and latin rhythms. The composition is collective; the lyricism and musicality is purposeful. Their sound is inspired from a wide range of musical styles across eras, from Thelonious Monk to Hiatus Kaiyote, from A Tribe Called Quest to Radiohead. “Weight of the Wild” is truly a fusion of styles, both topically and musically. Written months after the group’s return from living abroad in Buenos Aires, Argentina, the album is a memoir of both their travels and eventual return to NYC.

Afterthought is a San Francisco raised, New York based rapper and artists. Music tells his narrative, collaboration paints his world, growing up as a black interracial adoptee in a constantly changing San Francisco. Afterthought coming from a spoken word background, as well as a jazz ensemble, has performed at San Francisco Davies Symphony, Complex Oakland, Trans Pecos, Velvet Jones, Herbst Theatre, The Delancey, The Well, and Many other venues in New York and California

Currently based in New York, Cam Shaw is a Hip-Hop/Indie artist and producer. His songs touch on themes such as: the inner self, love/romance, mental health, and the enjoyment of life.

Cam’s genre blending music does not shy away from vulnerability, but is sure to do so with confidence. Drawing inspiration from Mac Miller, The Beatles, Dominic Fike, and even Bossa Nova artists, he has crafted his own sound that lands somewhere between Hip-Hop, Rock, and Indie Pop.

Cam began his music career as a bedroom musician, recording, producing, and mixing music from his home studio. Slowly building up a fan base and perfecting his craft, he has recently begun performing live at venues in NYC, most recently at Heaven Can Wait in NYC, selling over 40 tickets on a Wednesday. Over the past year he has amassed an impressive amount of music, with a 14 track, self produced album titled, “Floating”, set to release at the end of May 2022, and multiple singles to follow it.