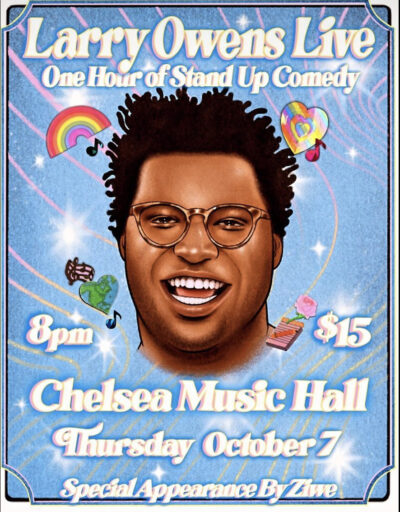 Larry Owens is a performer, writer, director, and comedian residing in New York City. Larry is a Drama Desk Award winner for Outstanding Actor and a Lucille Lortel Award Winner for starring as the alter ego of writer/composer/lyricist Michael R. Jackson in the seminal, groundbreaking, Pulitzer prize-winning and critically acclaimed musical, A STRANGE LOOP, at Playwrights Horizons, directed by Stephen Brackett, with choreography by Raja Feather Kelly. Larry can also be seen on the season 4 premiere of High Maintenance (HBO), Search Party (HBOMax), Helpsters (AppleTV), Betty (HBO), Dash and Lily (Netflix), the upcoming season of Modern Love (Amazon), the upcoming Miramax feature, SILENT RETREAT, directed by Todd Strauss-Shulson (ISN’T IT ROMANTIC?), and as a voice on the upcoming animated series Fairfax (Amazon). Larry studied drama and improvisation at the School at Steppenwolf and has headlined sold out venues like Caroline’s On Broadway and The Bell House.