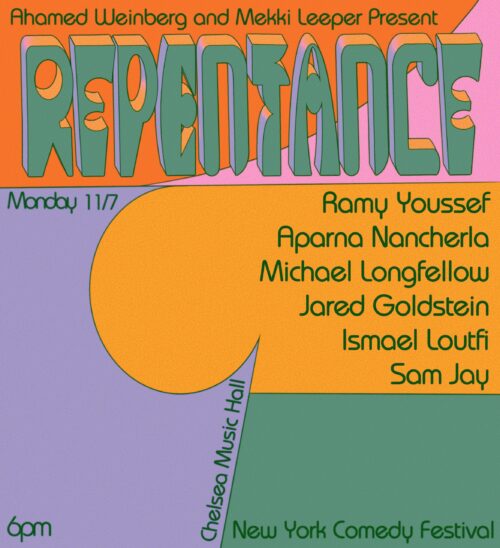 Ahamed Weinberg is a Los Angeles-based comedian from Philadelphia, who recently made his late night stand up debut on Late Night w/ Seth Meyers (NBC). He is one of Vulture’s 20 Comics to Watch and was awarded New Face at the 2016 Just For Laughs Festival in Montreal. Credits include writing, directing, and starring in Ahamed’s Ramadan Diaries (Comedy Central Digital), and appearing in Comedy Bang Bang (IFC), The Eric Andre Show (Adult Swim), I Love You, America (Hulu), Comedy Knockout (Tru TV), and Insecure (HBO). His film Lovebirds premiered on Amazon Prime in November as part of their inaugural FunnyFest short films festival, and his Facebook series Please Understand Me is set to debut later this year. He is also developing season 2 of Ahamed’s Ramadan Diaries for Comedy Central Digital.

Mekki Leeper is a comedian from Philadelphia, now in Los Angeles. Mekki can be seen on Mindy Kaling’s hit HBOMax series The Sex Lives of College Girls, where he plays Eric, editor of the campus’s prestigious comedy magazine. Mekki’s standup has been featured on The Late Late Show with James Corden, Comedy Central’s Up Next, he’s been named a Comedian You Should Know by Vulture, and his Comedy Central Stand Up Featuring set is one of the most viewed of the series. Mekki’s been named a New Face of Comedy by the Just for Laughs Comedy Festival in Montreal, has performed at Comedy Central’s Clusterfest, Bridgetown Comedy Festival, and headlines clubs and colleges around the country.