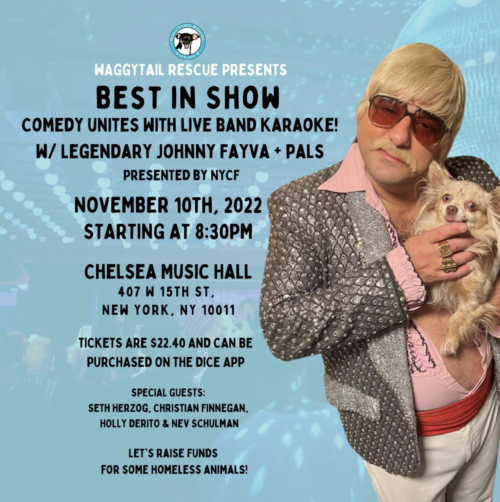 Waggytail Rescue’s Best in Show is a celeb riddled mix of comedy and live band karaoke. This event is especially unique as audience members can purchase raffle tickets for items or opportunity to take the stage with the famous Rock Star Karaoke live karaoke band.

Hosted by the legendary Johnny Fayva

Seth Herzog is a longtime, beloved NYC comedian/actor, he’s currently the resident comedian and sketch performer at the “Tonight Show starring Jimmy Fallon,” and previously of Jimmy’s “Late Night.” He has made other big turns on the small screen appearing on Comedy Central’s “Broad City,” “Chappelle Show,” “@midnight,” “Stella,” “John Oliver’s NY Stand Up Show.” He has also appeared on NBC’s “30 Rock,” CBS’ “Love Monkey,” and was a regular, hilarious talking head on VH1 for 10 years. You also might remember him from his big screen work in “Boy Band,” “Role Models,” “Prime,” “The Ten,” “In the Weeds,” “Safe Men” & more. He does stand up all over the NYC and the country, including his big monthly show “Sweet” at the Chelsea Music Hall.

Christian Finnegan is a stand-up comedian, writer and performer who is perhaps best known from “Chappelle’s Show”, VH1’s “Best Week Ever” and “Are We There Yet?” Politics junkies may recognize him from his many appearances on Countdown with “Keith Olbermann”. He’s also been seen on “Conan”, “The Late Late ShowHe has appeared on “Conan”, and “The Today Show”.

Yaniv “Nev” Schulman is an American TV host and producer. He is best known for the 2010 documentary film Catfish and the follow up TV series Catfish: The TV Show on MTV of which he is the host and executive producer.

Proceeds will help Waggytail Rescue in their tireless mission to rescue, rehabilitate, and pair humans with homeless dogs and cats.